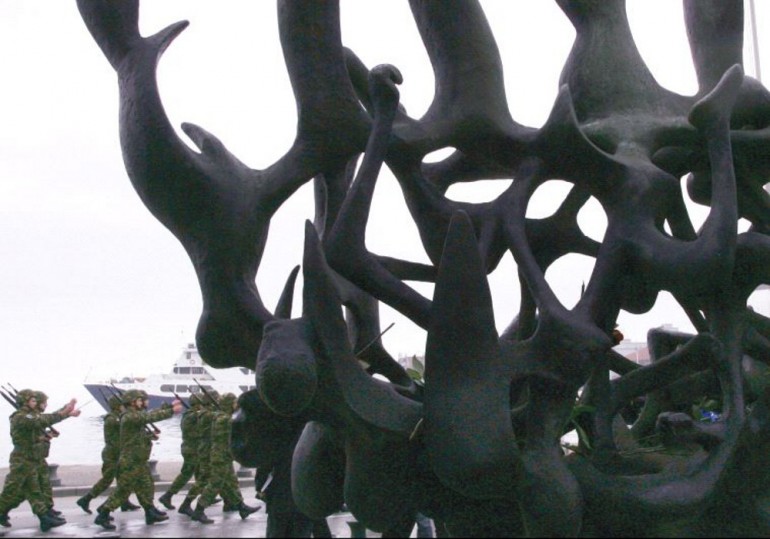 Where should I start ? I’ll start at the end. On Saturday we went to see the film Ouzeri Tsitsanis (Cloudy Sunday) by director Manousos Manousakis in the framework of the Jewish Film Festival at the Jerusalem Cinematheque. “Ouzeri” in Greek is the place where people drink ouzo and eat mezedes. Vassilis Tsitsanis was one of the most important figures in the formation of modern Greek music, a master bouzouki player and among the forces shaping the Rebetiko (urban Greek music) in Salonica before and during WWII. The screening hall was filled with known faces of Greek Jews, Greek music lovers, philhellenes and beyond.

The film was balanced, nuanced and rich, and succeeded in telling the story of the Greek Jews of Salonica, the “madre d’Israel,” from different perspectives. We saw the Sephardi Greek Jews, heard them speak in Greek and Ladino and sing songs in Judeo-Espagnol in their communal choir as well as get involved in the new socialist ideas. We were exposed to the foreign sounding names of the foods they ate, the synagogue they went to, the controversial rabbi they followed. We also saw the inner strife among them, of those who suggested not listening to the rabbi and his directives of going along with the Germans’ requests, and those who felt safer in complying with the Jewish community’s policy rather than straying away from it and going on their own. We were shown Estrea, the young Sephardi Jewess (Christina Chila Fameli) who is active in the resistance by typewriting its messages in a well-hidden basement. Although she is issued false identity papers as a Greek Orthodox woman, and has the option to escape with her Greek Christian boyfriend Giorgos (Charis Fragkoulis) to Athens, Estrea opts to turn herself in as a Jew and get on the train to be with her family. Estrea knows that the train is headed for Poland, but doesn’t know its ultimate destination is Auschwitz, where 96% of Salonica’s Jews perished.

We were also exposed to the Greeks – Jews and Christians – who collaborated with the Germans and served as traitors, and assassins, as well as those like Giorgos and Vassilis Tsitsanis (Andreas Konstantinou) who were part of the resistance, and hid Jews.

The film in a sense is a tribute to all that was and is no more. It portrays how this crime was made possible due to the apathy of Greeks to the fate of Greek Jews ; how the Jews – who had no precedent or knowledge of what was really happening – chose to stick with their families and the rabbi’s directives, even though the resistance may have been an escape route for many more, like in Athens, Larisa or in other cities. This is an intricate and tragic story that took place in Thessaloniki in the years 1942-1943 and which has never before been told cinematically. Manousos Manousakis and his team deserve our appreciation for their work, released in 2015.

A story we identify with

To me and my husband this was a story that we identify with, and are part of : the story of the annihilation of 87% of Greek Jewry. My husband, Elias Messinas, is named after his grandfather Elias Negrin whom he never got to meet – he went into hiding with his family, protected by Greek families in Athens, but was given up by a traitor and subsequently deported to die in Auschwitz. Fortunately, Negrin’s wife and daughters managed to survive the war hiding with Christian families in Athens, with fake identity cards, pretending they were Christian refugee relatives of their benefactors.

My father’s immediate family also managed to survive this way. The rest of the family, who remained together in Ioannina in northern Greece, to carry on the shop’s business affairs and to be with the elders, were deported and perished in Auschwitz.

The film’s theme hit home, and tears came to my eyes as I saw scenes of both love and pain my homeland had brought on so many of us Jews. We loved the language, the music, the nature, but mostly we loved its people. Many among the Greek people saw us as strangers in our own land. And yet, there were among them, those Greeks who did love and did help and did rescue, and me and my husband owe our lives to them, to the ones that helped, to the ones that hid, to the ones that risked their lives to take in Jews in their homes pretending they were relatives from the village, to the ones who created the fake documents thus helping the Jews survive. And we are grateful for their acts of lovingkindness and righteousness.

Prior to the screening we had the privilege of listening to a beautifully orchestrated Rebetiko performance by the band of Israeli musician Tomer Katz, who partnered with the visiting Greek musician and singer Sotiris Papatrayannis. They played and soulfully sang authentic Rebetika songs to which a handful of us danced in joy.

But do not ever take that outer display of joy as pure, genuine joy. It is a joy of survival blended with the pain of the loss of all those who perished.

Salonica is to many of us not the madre d’Israel, as the city is commonly known in Judaism, but rather the madre de l’amor y de la dolor, i.e. the mother of love and pain. Salonica is to Greek Jews the blend of love and pain we have felt from our homeland, to our bones. And today what consoles us is that Thessaloniki’s current mayor, Yiannis Boutaris, along with the Jewish community’s president, David Saltiel, are partners in acknowledging locally and internationally the pre-war Jewish presence and contribution to the city. The recent restoration of the central synagogue Monastirioton, which my husband had the privilege of being the project architect for, is only one of the steps they are taking together to ensure that the city’s dwindling 1,000-member Jewish presence will be sustained and safeguarded to the future to tell its story.