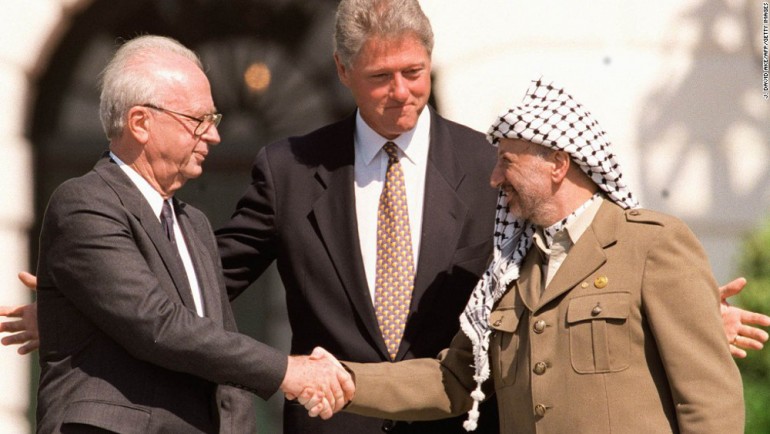 The Israeli-Palestinian “peace process” will soon be 25 years old—yet there is no process, and there certainly is no peace. It’s not because of a lack of trying : Oslo in 1993, Camp David in 2000, Taba in 2001, the Arab Peace Initiative in 2002, the Roadmap for peace in 2003, Annapolis in 2007-2008, and the efforts of former U.S Secretary of State John Kerry in 2014-2015 are all stations in a long list of failures. The attempt to search for those to be blamed is futile, even destructive. The blame game gives the Israelis no extra security and the Palestinians not even the smell of independence. But there is still a need to find the causes for the failures if we care about Israelis and Palestinians and wish to see a solution that ends the misery and bloodshed. The common feature among previous peace talks was the premise that a comprehensive settlement of the conflict is a binary proposition—that is nothing is solved until everything is solved. Following this logic, entire rounds of negotiations failed because the two sides could not reach an agreement on all issues. Soon, there might be another proposition on the table by the Trump administration—predicated on the same premise and likely to meet the same fate of its predecessors. We propose avoiding this trap by trying a new paradigm. The ultimate solution remains the two-state solution but reached in a different manner. The two sides ought to start negotiating issues that are easier for them to agree on and require small or no major concessions. The very attainment of agreements, which would subsequently be implemented, could serve as confidence-building measures. A possible list of such issues includes the urgent situation in Gaza. Israel pulled out of that area, has no claim to it ; therefore Gaza should not constitute an obstacle to progress on other issues such as water, energy, the environment, the bilateral economic regime. Palestinian economic activities in Area C—which spreads over 60 percent of the West Bank and in which the Palestinians have, according to the current agreements, neither security nor civilian authority—can create a positive economic and political momentum. Allowing Palestinians economic activity in parts of Area C is certainly an important move by Israel. Although it does not amount at this stage to a change of the status of this area, it can help relaunch the political process. There are difficulties for the Israelis and Palestinians in adopting this approach. If the Israeli government goes for it, the country will be confronted with a critical question : What is Israel gaining from such agreements ? In other words, what is the Palestinian quid pro quo ? The Palestinians, on the other hand, may suspect that by receiving more supplies of water, electricity, and generally improved standards of living, they will postpone attaining their political objective—an independent Palestinian state. A possible way to make this proposal palatable to the Israelis is for Arab states—such as Saudi Arabia, Morocco, and certainly Egypt and Jordan—to offer a set of measures of increased cooperation and normalization of relations. Furthermore, convincing both the Palestinians and Israelis to walk this path may require a concerted effort by the Middle East Quartet (comprised of the EU, Russia, the UN, and the United States) to pass a UN Security Council resolution that adopts the ultimate goal of two states. It would consist of one existing Jewish state and a Palestinian state, with an option that the Palestinians can choose to either immediately become a state with provisional borders or wait until the borders are decided by the two sides. In addition, the resolution should contain a concrete timetable, a list of immediate and long-term issues to be settled, and an international mechanism to track progress. It is necessary, of course, that all parties concerned commit themselves to the approach. One also cannot underestimate the difficulties in attaining such a broad international agreement. The Israelis are soon heading into an election period, the Palestinians are internally split between Ramallah/Fatah and Gaza/Hamas, and the members of the Middle East Quartet differ on major international issues. We realize that it is difficult to reach common ground, but the involvement of the international community is essential—and the Middle East Quartet may find it useful to unite on this one. If the EU has a better alternative, let them present it. But do it quickly.