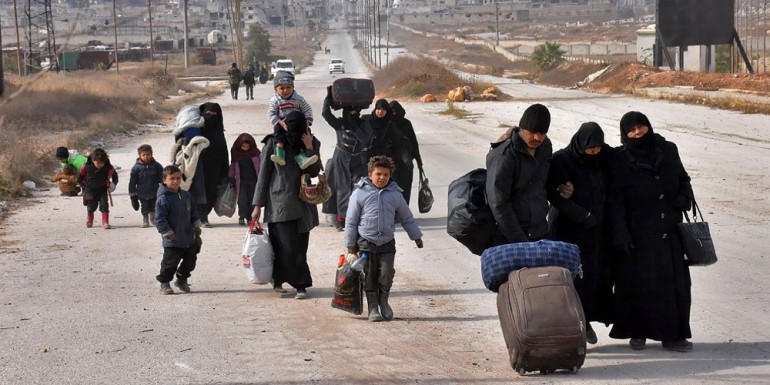 Maybe Annegret Kramp-Karrenbauer was right. In October 2019, the German defense minister suggested the creation of an internationally controlled security zone along the Turkey-Syria border, which could be led by NATO. It would have provided some kind of safe haven. It would have also addressed some of Turkey’s security concerns. Nothing came of her proposals, which were politely listened to by NATO and the EU and then discarded. Both organizations are now paying a heavy moral and political price for the devastation and suffering taking place in Syria. They will pay a very high price for Russia’s military and political role—as well as Iran’s—in this part of the Middle East. They will pay a heavy price over the way Turkey has consistently blackmailed NATO and the EU. The war in Syria has left both organizations morally high and dry. The moral consequences for NATO and the EU are clear. NATO is supposed to be a military and political organization made up of democratic countries that uphold certain values. As a civilian organization, the EU boasts about values too and defends its democratic principles based on solidarity, the rule of law, and international obligations.

The way in which Turkey, as a leading NATO member and a candidate member country of the EU, has run roughshod over these principles has weakened the credibility of both organizations. They have been unable to respond to Turkey’s instrumentalization of citizens who are fleeing daily bombardments in Syria and who had been given refuge in Turkey. In order to stop refugees and migrants from entering the EU via bloc members Greece and Bulgaria, Angela Merkel, the German chancellor, spearheaded in 2016 a plan to keep them in Turkey. In return, the EU agreed to pay Turkish President Recep Tayyip Erdoğan €6 billion for their upkeep. Since then, at least 3 million refugees have remained in Turkey.

Merkel needed the deal because the EU was bitterly divided over agreeing a refugee and asylum policy—with Germany, in particular, and a handful of other countries taking in hundreds of thousands of refugees in 2015. Merkel’s decision, based on international law, morality, and decency, was “rewarded” by a surge in support for anti-migrant, populist movements. The deal with Turkey was fragile from the beginning. Instead of using the arrangement to agree on a common refugee and asylum policy, the EU continued to squabble over the political, social, humanitarian, and legal need to protect refugees. That gave Erdoğan ample opportunities to blackmail the EU—threatening to end the deal over refugees if either the EU didn’t pay more or if NATO didn’t play ball. Erdoğan demanded the latter do so on February 28, 2020.

After thirty-three Turkish soldiers were killed by Russian-backed forces in Syria on February 27, Ankara sought help from NATO by demanding an emergency meeting of the organization’s ambassadors. This is despite the fact that Turkey invaded northeastern Syria in October 2019 and—along with Russia and Iran—has helped prolong the war in Syria. In addition, Turkey signed up to buying Russian S-400 missile systems, a decision that NATO resented but was unable to prevent. Now that Erdoğan’s relationship with Russian President Vladimir Putin is under strain, to say the least, Turkey has turned to NATO for political if not defensive support.

After the emergency meeting on February 28, NATO Secretary General Jens Stoltenberg had no option but to utter words of solidarity for Turkey. “Allies offer their deepest condolences for the death of Turkish soldiers in last night’s bombing near Idlib,” he said. “Today’s meeting is a sign of solidarity with Turkey. Turkey is the NATO ally most affected by the terrible conflict in Syria, which has suffered the most terrorist attacks, and which hosts millions of refugees,” he added. The United States said it might be prepared to provide Turkey with Patriot missiles. But that’s not going to ease the suffering in Idlib. As for the EU, its bosses have called several high-level meetings, not because of Idlib per se but because of the fear of an influx of tens of thousands of hapless refugees who are now trying to cross into Greece after Erdoğan said he would no longer protect the border.

Greek security forces are now stopping the refugees from entering their country, because Athens knows other EU countries won’t accept them and help process their asylum requests. Greece, which has used live ammunition to stop refugees from leaving Turkey, has asked Frontex, the EU’s border protection agency, to send a rapid intervention force. No doubt, there’ll be more hand-wringing by the EU and NATO about the dire humanitarian circumstances in Idlib and Turkey’s actions. Unless they go back to Kramp-Karrenbauer’s proposals, there’ll be more Idlibs, more refugees desperate to flee, and more fodder for populists across Europe. So much for the geopolitical EU that European Commission President Ursula von der Leyen advocated when she took office.