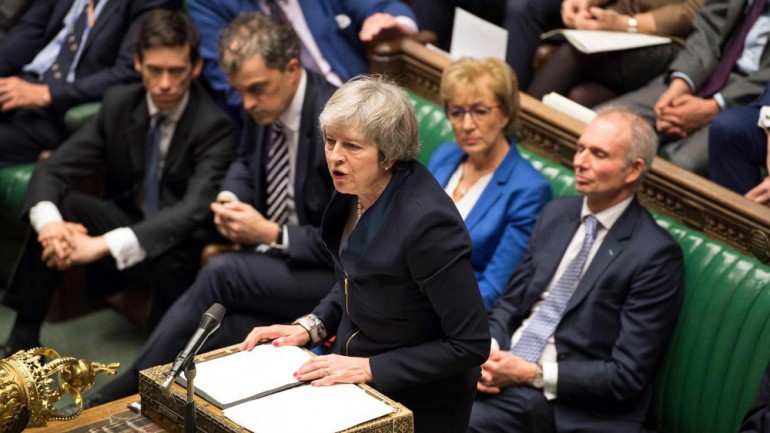 When the dust finally settles on the UK’s Brexit saga, the story may be seen to be clear-cut, its conclusion inevitable. But, just now, it resembles a battle scene in Tolstoy’s War and Peace : the sound and fury are all around, but their outcome impossible to gauge.

Let us review what we know, before examining what might happen next.

1. The withdrawal agreement negotiated between the UK government and the EU is dead. Parliament rejected it by a massive 230-vote margin. That is big enough to dispel any suggestion that MPs would approve of a revised version containing only minor changes.

2. The EU has made clear that big changes are out of the question—especially on the vexed issue of the Irish backstop.

3. Few MPs want the UK to crash out of the EU without some kind of deal. The consequences for investment, jobs, and living standards would be dreadful. The precise hit to the UK economy— 5 per cent ? 8 per cent ? 10 per cent ?—is far from certain, but every reputable economist agrees that the damage would be considerable.

4. However, the present legal position is that the UK will crash out of the EU on March 29 unless Parliament decides to change course. It is not enough for most MPs to oppose no deal ; a majority must be assembled for some other strategy.

So what will happen now ? History suggests that Theresa May will resign. No previous prime minister has survived a mauling on this scale on a central plank of government strategy. Most famously, Winston Churchill replaced Neville Chamberlain as prime minister in May 1940, when fewer than 40 Conservative MPs voted against the government (though another 60 abstained)—and Chamberlain still actually won the vote overall. This time, 118 Conservatives voted against their government, and it was roundly defeated. However, the history books are no longer providing a useful guide. Britain’s House of Commons is best viewed as a collection of minorities. In round numbers, the three largest factions in the 650-member chamber are : pro-EU Labour 250 ; pro-withdrawal agreement Conservatives 200 ; pro-no-deal-Brexit Conservatives 100 ; pro-EU Scottish Nationalists, Liberal Democrats, Green, and Plaid Cymru (Welsh Nationalists) 50.

This helps to explain both the government’s defeat and the difficulty of charting a way forward. The government’s withdrawal agreement united two diametrically opposed factions : strong pro-Europeans and those most virulently opposed to the EU. The most immediate question is whether Mrs. May will continue as prime minister. She may, on reflection, decide she does not want to. However, she has a strong—some would say stubborn—sense of duty. If she chooses to fight on, she can take comfort from the fact that, while her Brexit deal has been voted down, there is neither an obvious alternative policy nor national leader that can command a parliamentary majority.

Moreover, the one thing that unites Conservative MPs (alongside the ten Democratic Unionist MPs that have agreed to keep her in office) is that to bring her down now could result in a general election and Jeremy Corbyn becoming prime minister. Corbyn is by far the most left-wing leader Labour in living memory. May is almost certain to survive Labour’s decision to move a vote of no confidence in the government (1).

So the probability (but emphatically not certainty) is that May will remain prime minister. She may have another go at persuading the EU to agree a deal that she is more likely to get through Parliament. I should be surprised if this tactic worked. A deficit of 230 in the House of Commons is too great to be overturned by minor concessions—even if the EU were willing to offer any, which is by no means certain. Then what ? Mrs. May’s strategic choice, if she remains in office, is to pivot to the 100 or so hardline, anti-EU Conservative MPs and argue for a harder Brexit than the withdrawal agreement. Business would not like this. Sterling would fall. And it is by no means certain that this would command a parliamentary majority : at least ten, possibly 20 or more, pro-EU Conservative MPs would resist such a strategy. Alternatively, Mrs. May could cast the 100 hardline Brexiters adrift and build bridges to those in other parties who want a more collaborative relationship with the EU.

This could take one of two forms. One is a “soft” Brexit, such as “Norway-plus,” whereby the UK would remain in the customs union and single market but withdraw from the EU’s political arrangements. This has the advantage of carrying out the formal decision in the 2016 referendum to leave the EU while protecting the UK’s economy. But the UK would continue to pay annually into the EU’s budget, it would have to abandon the ambition to strike its own trade deals with other countries, and it would still be bound by the EU’s freedom of movement rules.

Alternatively, the UK could move toward a fresh public vote, which would open the way to a possible reversal of the 2016 referendum and the UK remaining in the EU after all. Perhaps Mrs. May will end up advocating a new people’s vote. More likely, if it happens, Parliament will have taken control of the process and insisted on a change of course. This would probably involve abandoning the March 29 date for Brexit. (A fair number of the pro-withdrawal agreement Conservative MPs are, in fact, pro-Remain but chose to back Mrs. May as party loyalists. They may end up supporting a referendum later this year as a route to stopping Brexit altogether.)

As this analysis indicates, there are no certainties. The UK might crash out of the EU, not because Parliament wants it but because MPs cannot agree on an alternative solution to the current crisis. A new compromise might be crafted that MPs accept. We might end up with “Norway-plus” deal or a referendum. Only a fool would bet their life savings on any one of these. However, the chances of crashing out without a deal have risen a little, the chances of a fresh referendum have risen a lot, and the chances of any kind of compromise have fallen.