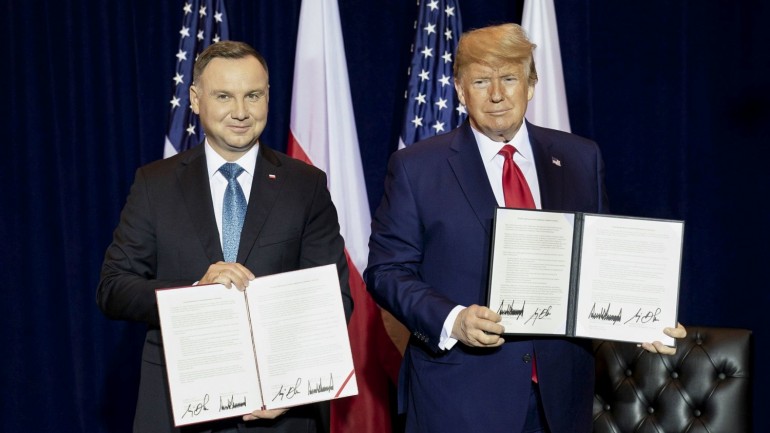 First, the good news. Despite the governing nationalist-conservative Law andJustice (PiS) party doing everything to monopolize Poland’s presidential election campaign, over 68 percent cast their ballots at the vote’s second and final round on July 12, 2020. A near-record high. Moreover, it ended up being an extremely tight race. The incumbent, PiS’s candidate, President Andrzej Duda, barely snatched victory, winning 51.03 percent of the votes. His opponent, Rafał Trzaskowski, a latecomer to the campaign, won 48.97 percent.

Now, the bad news. The country, the EU’s sixth-largest economy, is deeply polarized between East and West, between younger and older generations, between cities and rural communities, and over the role of values and the country’s past. It’s hard to see Duda finding common ground with the millions of voters who opted for the pro-EU, liberal Trzaskowski. It’s also hard to see Duda changing course from lambasting liberal values, from using antisemitism and anti-German slogans to consolidate his popularity, from undermining the independence of the judiciary, and from Poland’s current collision course with the EU. Indeed, now more than ever, the EU has a big responsibility for the future of Poland’s democracy and the credibility of the bloc’s legal order.

The EU has three crises on its hands : the coronavirus pandemic, a massive economic downturn, and an attack on the core values that underpin the European project—the rule of law and respect for the EU’s treaties and rules. The challenge is to tackle these crises in a coherent way. Solidarity and financial transfers must strengthen the values that connect Europeans, not undermine them. This is not what is happening at this moment. Poland has benefited enormously from generous EU support in recent years. It stands to benefit more in the near future. In May, the European Commission proposed a recovery fund worth €750 billion to save the EU economies most affected by the coronavirus. Out of this, €63.8 billion is to be allocated to Poland, more than half in the form of nonrefundable grants. It would be the third-largest tranche among EU countries after those to Italy and Spain. At the same time, the commission proposes to increase the EU’s next seven-year budget, running from 2021 to 2027, including more money for Poland through structural and agricultural funds.

The Polish government said the generous funding proposal, which is yet to be agreed by member states, was due to its tough stance during negotiations. Yet the proposal ignores the elephant in the room : an unprecedented crisis concerning Poland’s rule of law. On October 10, 2019, the commission took Poland to the Court of Justice of the EU (CJEU) in Luxembourg, arguing that a new disciplinary regime for judges seriously undermines the independence of courts and violates the Treaty on European Union (TEU). On April 8, 2020, the CJEU ruled : “Poland must immediately suspend the application of the national provisions on the powers of the Disciplinary Chamber of the Supreme Court with regard to disciplinary cases concerning judges.” Poland was given until early May to inform the commission of how it would enforce the judgment. But the Disciplinary Chamber rejected the CJEU’s judgment. Polish Deputy Justice Minister Sebastian Kaleta argued that the CJEU decision was “an usurpation violating Polish sovereignty” and “not, in fact, within the framework of the powers conferred on the EU, because the EU simply does not have the authority to assess the legality of constitutional bodies in a member state.”

The risk is real that the Polish government could be preparing to reject the decision of the CJEU on an issue of fundamental importance, thus cutting Poland off the European legal order. The effort to create a judiciary where every judge can be intimidated and controlled by the Polish minister of justice, who is also the chief prosecutor, continues unabated.

The EU needs to react, but it has few tools. What is required seems obvious : member states should insist that future financial solidarity is conditional on respect for the rule of law. Implementing all CJEU judgments related to the rule of law should be a non-negotiable precondition for receiving funding from the EU budget. The founding principle of the EU is that its twenty-seven democracies decide voluntarily to share sovereignty based on the trust that they will all abide by some common standards. Having independent courts is one of these standards. Article 2 of the TEU states that the EU is “founded on the values of respect for human dignity, freedom, democracy, equality, the rule of law and respect for human rights, including the rights of persons belonging to minorities.” Article 19 demands that member states “provide remedies sufficient to ensure effective legal protection in the fields covered by Union law.” But what happens when one member state undermines the rule of law and democracy, violates articles 2 and 19, and ignores judgments on this from the CJEU ? What happens is that the bond tying the twenty-seven members together dissolves—that is, the belief that all member states remain fully committed to the values of the treaties.

This belief is of existential importance. It needs to be defended in the whole EU’s vital self-interest. And such a member needs to be confronted with the tools the EU has : political arguments, court decisions, and funding. Countries refusing to implement judgments of the CJEU relating to the basic rule of law should not receive EU money. Once a member state government takes an à la carte approach to the rule of law, the basis for solidarity disappears. If some do not abide by the rules that bind all, why should others ? Coronavirus recovery grants—and all future structural funds—should be open to every EU member committed to respecting the values of the European treaties. This should be self-evident, but it no longer is. After more than a decade of talk about conditionality, it is time for member states to act. If solidarity is to survive, it must also extend to respecting the principles that bind all members. Poland, like all EU members, should receive solidarity and support. But all the other members should also have certainty that Poland, or others in the future, will not undermine the principles that hold the EU together. This is not happening ; the damage Poland is inflicting on the EU is immeasurable. Does Duda really understand what is at stake ?