Charlie Hebdo and the Poison for Europe’s Soul 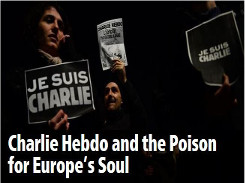 During the night of January 7, tens of thousands of French citizens took to the streets in several cities to pay homage to the twelve people who were gunned down earlier that day in Paris. Most of the victims, who included four leading cartoonists, worked for the French satirical magazine Charlie Hebdo. The left-wing publication had been at the forefront in publishing cartoons. It spared no religion or creed. Charlie Hebdo’s offices had already been attacked in 2011. The magazine’s provocative depiction of the prophet Muhammad enraged those who believed that the press had no right to publish such images. The latest shooting should encourage European governments to protect press freedom and other civil liberties, not restrict them. The January 7 attack on Charlie Hebdo coincides with growing anti-Islam movements across Europe. The most recent group to be spawned is in Germany. There, an organization called Pegida (Patriotic Europeans Against the Islamization of the West) is attempting—although it would deny it—to sow hatred against immigrants and refugees, mostly Muslims who are fleeing the conflicts in Syria, Iraq, and Libya. In the aftermath of the Charlie Hebdo attack, the worry now is that the leaders of these anti-Islam and populist movements will use the murders of the cartoonists to justify their propaganda. The danger too is that Muslims, whether European citizens or not, will become the target of such Islamophobia. Some government leaders, but not nearly enough, have already spoken out loudly against attempts to incite hatred and racism. Angela Merkel, the German chancellor, has not hidden her disgust for such populism and nasty rhetoric. She has taken a tough stand against Pegida. And as soon as she heard about the attack on Charlie Hebdo, she made no bones about the need for Europe to further defend, not weaken, its values. Those values, she said, are universal. No doubt, authoritarian regimes and the Islamic State would—and indeed do—challenge that assumption. Freedom of the press is inextricably tied to universal values and is not an exclusively Western liberty. To curb that freedom now, and for anti-Islam movements at the same time to use the attacks on Charlie Hebdo to incite hatred against Muslims, would undermine the civil liberties and tolerance espoused by the West. Such steps would also undermine the efforts of advocates of human rights in nondemocratic countries or in states where such rights are under increasing threat, such as Turkey and Russia. Yet however much authoritarian regimes or fundamentalists believe that the West’s values are poison, European governments must resist the temptation that they themselves poison those values. The reaction by any government after such an attack as happened in Paris is to increase security. French President François Hollande has put his country on attack alert. His duty, as he said soon after the murders, was to protect the people of France. Any leader would say that. And any country’s citizens would expect that, too. But the line between protecting citizens and protecting civil liberties is very fine. As it is, civil liberties movements, particularly in the UK and the United States, are increasingly critical of the way in which their governments’ antiterrorism measures impinge more and more on individual freedoms. The decision by Britain and the United States to suspend habeas corpus—thus preventing a detained person from being brought before the courts to examine that detention—was a serious blow to civil liberties. That is just the tip of the iceberg. U.S. Senator Dianne Feinstein’s devastating report on CIA detentions and torture has greatly damaged America’s standing as a country passionate about defending human rights and civil liberties. France’s and Europe’s reaction to the attack on Charlie Hebdo will be watched closely by those struggling for freedom across North Africa and the Middle East. Freedom House, a nongovernmental organization that monitors press freedom around the world, in 2013 reported an increase in the repression of the media. More recently, restrictions on the press in Turkey—not to mention the rise of the Islamic State—has imposed further pressure on the media, particularly on cartoonists. And since cartoons are one of the few ways of describing so much with a minimum of words, their artists have become easy prey for those who fear that kind of freedom of expression. Those at Charlie Hebdo paid a high price for not poisoning that freedom.