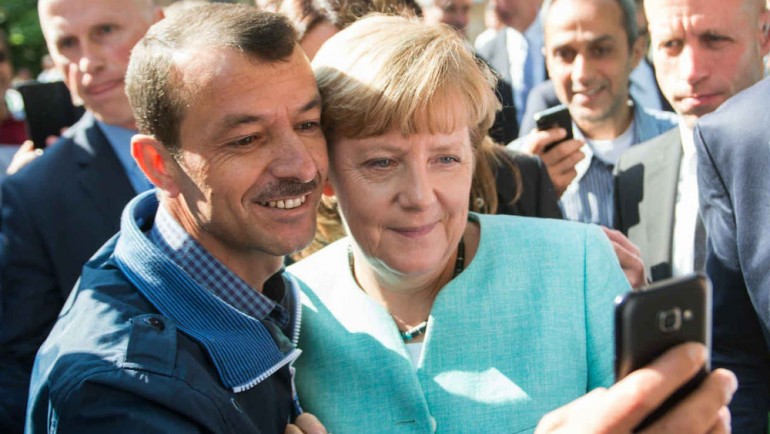 When Angela Merkel hosted the Dalai Lama in the chancellery back in 2007, there was outrage by China and scorn from the Social Democrats, her coalition partners. Beijing threatened to cancel lucrative trade contracts with Berlin. That didn’t happen. It threatened to pull out of a German-Chinese dialogue on judicial issues. Which it did. The dialogue was inconvenient for Beijing. The latter didn’t carry any economic cost. The Social Democrats railed against Merkel’s guest in the chancellery. The party claimed she was using human rights to gain political mileage at home at the expense of strengthening ties with China. Such was Merkel’s commitment to human rights that she tried to stiffen the backbone of her own coalition and other EU countries when it came to something as basic and essential to the bloc’s raison d’être.

Yet recently, despite the EU’s new global human rights sanctions regime, Germany’s commitment toward defending human rights, whether behind closed doors or openly, has been waning. If the country’s Green Party enters the new government after this coming September’s federal elections, it could give the EU a much-needed sharper and more principled approach to defending human rights. This is part of the Greens’ agenda. It would also demonstrate to the EU’s Eastern and Southern neighbors that contesting human rights is not a given. Germany’s deficit on this issue has increased.

Outside the EU, Berlin’s criticism of the crackdown in Hong Kong has been half-hearted. If it had really wanted to take an additional stance, Berlin—and EU leaders—could have openly criticized Hungary for blocking a statement on April 16 that would have supported Britain and the United States in defending human rights in Hong Kong. This was, after all, about the transatlantic alliance working hand in hand with respect to China. Also, Germany’s criticism of the detention camps for the Uighur minority has been tempered by the German car industry.

When it comes to Russia, Merkel’s humanitarian intervention in treating in a Berlin hospital the opposition leader Alexei Navalny after he had been poisoned by a chemical agent last August was admirable. But while she warned Russian President Vladimir Putin for sending Navalny to prison on his return to Russia, her criticism wasn’t matched by deeds. When Navalny’s supporters took to the streets after he was detained, the security forces violently responded. So much for the pressure Merkel and French President Emmanuel Macron had put on the Council of Europe (CoE) to restore Russia’s voting rights, which had been revoked following Moscow’s illegal annexation of Crimea in 2014. It was argued by German officials, among others, that restoring those voting rights would allow Russian citizens to seek redress in the CoE. Now that Germany is chairing the Committee of Ministers of the CoE’s Parliamentary Assembly, let’s see if Merkel will change tack vis-à-vis Russia when she speaks on April 20.

As for Berlin’s criticism of the unremitting crackdown in Belarus, it has been disappointing too. Just think : in the EU’s direct neighbor, over 35,000 people have been detained since last August. There are over 220 political prisoners. The limited sanctions on a handful of Belarusian President Alexander Lukashenko’s entourage have been close to shameful. Inside the EU, Poland and Hungary, joined by Bulgaria, are systematically undermining the rule of law to such a degree that they are breaking the EU treaty itself. The more they get away with it, the more it will encourage other member states to challenge the rule of law. Merkel’s tepid criticism of what is taking place in Poland and Hungary is puzzling. This is about upholding the EU treaty that Warsaw and Budapest signed up to when they joined in 2004. It’s also about using the treaty against those governments that challenge it.

Undermining human rights should carry a price. It does not mean isolating the countries in question. “In a globalized and networked world, isolation is not the correct instrument,” German Economy Minister Peter Altmaier has said. It’s about compartmentalizing issues and linking them when necessary—an approach the Biden administration is now pursuing. There is no reason why Merkel cannot discuss climate change with China’s President Xi Jinping—which she did on April 16 along with Macron—and in another category, speak candidly about human rights. The latter is not about interfering in the internal affairs of another country, a catchphrase so often used by semi-authoritarian or authoritarian regimes. It’s about defending civil rights and human rights that are universal and that spill over into trade, climate issues and so many other aspects of economic and social life. Self-censoring criticism of these violations—or holding back from linking them to trade issues, such as stopping the Nord Stream 2 gas pipeline—not only encourages more abuses. It discredits what the EU stands for.