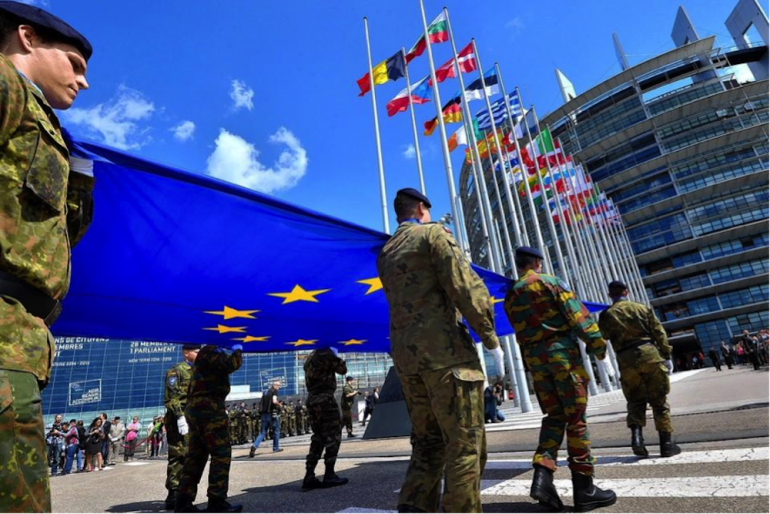 The EU has awakened to defense issues and over the last three years multiple initiatives have been presented as “game-changers” for European cooperation in this field. But it would be a mistake to believe that the EU has successfully built itself into a credible defense actor yet. Instead it is about to enter into an implementation phase, during which much can still go wrong. The pressure to deliver is high. Whether the EU can overcome its current political tensions to present a more positive agenda will determine the fate of the defense momentum in the near future.

The past three years have seen the creation of new European defense initiatives. New acronyms have been thrown into the “EU alphabet soup,”[Council of the European Union, EUMC Glossary of Acronyms and Definitions, February 22, 2019.] and EU institutions have geared up to fully embrace their new role in defense matters. This creative period, which partly stemmed from the shock of the annexation of Crimea by Russia in 2014, must now be followed by an implementation phase. There is little political appetite and limited administrative bandwidth to design new initiatives, as EU institutions and member states focus on turning existing projects into concrete policy successes. One priority is to overcome the hurdles that are preventing full implementation of the European Defence Fund (EDF) and the Permanent Structured Cooperation (PESCO). The relevant actors continue to discuss the conditions for third-country participation in EU industrial projects and the access to EU funding. The Finnish presidency of the Council of the EU in the second half of 2019 has been particularly involved in overcoming these issues, which have poisoned the launch of the two initiatives for months. A compromise that would enable the United States and a post-Brexit United Kingdom to participate under certain criteria now seems to be within reach. In 2020, the European Commission will publish 12 additional calls for proposals for EDF programs, with the fund becoming fully operational in 2021. The funding of the EDF is a different question : if the final sum allocated from the EU budget remains far below those in the announcements of recent months, the symbolic hit to the EU’s ambitions will be significant. In that context, the first budget proposal submitted by the Finnish presidency, which allocated €6 billion over seven years instead of the €13 billion that were expected, was perceived as a very worrying sign in many European capitals. The 2020 Croatian and German presidencies will also have to focus on reinforcing the internal coherence among all the EU initiatives. With regard to capability development alone, the interactions of the Capability Defense Plan (CDP), the Coordinated Annual Review on Defense (CARD), Permanent Structured Cooperation (PESCO), and EDF form a complex system with risks of overlaps.[Dick Zandee, “EU and NATO Capability Development : Separate or Together ?”, in Corentin Brustlein (ed), “Mutual Reinforcement : CSDP and NATO in the face of rising challenges”, Focus Stratégique, Institut Français des relations internationals, October 2019.] The European Court of Auditors recently pointed out that the EU has now created four different defense-planning tools : the EU Military Staff ’s capability-development mechanism, the European Defense Agency’s capability-development plan, the new “coordinated annual review for defense,” and PESCO.[European Court of Auditors, Review No 09/2019 : European Defence, September 2019] They often contradict each other and should be coordinated internally, as well as aligned with NATO defense-planning timelines. PESCO, for example, would benefit if, instead of a long list of projects, member states created thematic clusters (say on cyber capabilities) and linked these clearly to the level of ambition, such as the goal to protect European citizens, as well as set stricter delivery timelines. Finally, the implementation phase will be marked by the approach of the new European Commission, under the leadership of Ursula von der Leyen. Her promise to build “a truly geopolitical Commission” reaffirms the EU role in promoting European interests globally. The division of labor among the different actors of the commission will be key : the European External Action Service, which is to work under von der Leyen’s guidance, may have more of a supporting role, while the newly created position of commissioner for internal market is supposed to drive policies to make the EU a “key industrial player” and control the long-awaited Directorate General for Defense Industry and Space. These structures will consolidate the role of the EU in these domains by giving more institutional weight to those in charge.

The EU’s defense momentum did not develop in reaction to one single development. Rather, European leaders were incentivized to strengthen the EU’s defense capabilities because of a general sense of a heightened threat environment, with a revanchist Russia, more terrorist attacks on European soil, and the U.S. security guarantee thrown into question. This all-encompassing sense that the EU needed to get its act together allowed European countries to spring into action without having to necessarily agree on exactly what it was they were going to defend against. The concept of “strategic autonomy” that was employed then by some to frame the EU’s defense efforts emphasized the risk of a United States that no longer comes to Europe’s aid : the union should strive not to be overly dependent on external actors. That concept has triggered opposition from those countries that are keen to do whatever it takes to keep the United States engaged in Europe, however, and different attempts to rebrand the idea have taken place. “Strategic sovereignty” stresses the EU’s ability to act, acknowledging that transnational threats cannot be addressed purely within the bounds of national sovereignty. The concept focuses on the Europeans’ legitimate ambitions to be sovereign strategic actors, without directly referring to their relationship with the United States. The proponents of strategic sovereignty attempt to soothe the concerns of those worried about a transatlantic uncoupling by emphasizing the goal to act “together when possible, alone if necessary.” But a concept cannot make up for a lack of strategic prioritizing, and deeper political issues need to be resolved. For one, the EU’s leadership crisis has almost become a truism. The political situation in Germany, with an uncertain coalition government and a weakened chancellor, undermines the country’s leadership. What is more, German strategic thinking is stuck between the European reflex of the political classes and a deep strategic dependency on the transatlantic relationship. President Emmanuel Macron proposes leadership by France, anchored in the concept of European sovereignty and the need to respond to the predatory behavior of great powers. His vision and how he communicates it, however, are criticized by many, including in Germany, where France is perceived as an unhelpful disruptor. Meanwhile no other European power seems able—or willing—to provide the necessary leadership and vision to compensate for the weakening of the Franco-German couple. These divisions are further fueled by a toxic transatlantic context. The administration of President Donald Trump has become increasingly hostile toward the EU, and regularly denounces the “neo-Gaullist” tendencies that affect the transatlantic relationship. Faced with the U.S. threats of trade war and sanctions, the European Commission has been a vocal proponent of European interests and under its new leadership is expected to play an active role in defining a positive agenda for the transatlantic relationship. Given the widening divisions among European countries on this matter, it is paramount for them to reject the emergence of a binary and sterile opposition between European defense and NATO. The balance between the national and institutional levels of decision-making will also define the strategic future of Europe. As EU initiatives will only bear fruits in a few years, the growing influence of Brussels in the defense realm will have to be accommodated by the member states. This is all but obvious given the political sensitivity of defense matters in many national capitals : as the EU only recently increased its ambitions in the defense and security realm, it faces the traditional tension between cooperation and integration. The EU’s and member states’ bureaucracies work on the development of frameworks and mechanisms to strengthen European defense industries and militaries, but it is still unclear if operational defense integration will also happen in the EU framework, or if cooperation frameworks outside the EU—such as the European Intervention Initiative—will thrive. With the relative strengthening of the European Commission’s role on defense-industrial issues, but no parallel strengthening of the External Action Service, the risk is that strategy becomes detached from capabilities.

Following the launch of the different EU defense initiatives, the European Commission now has to deliver on the high expectations placed on them. Its primary objective will be to execute and develop them. Results, however, may not be visible before several years. Sufficient financing will be crucial. The dispute around the concept of strategic autonomy has not led to any constructive consensus, and it will likely affect debates in the future. Member states and the EU institutions will continue to promote different concepts that encapsulate their own vision of defense cooperation, as illustrated the “ability to act” concept used by Germany’s Defense Minister Annegret Kramp-Karrenbauer and the recent remarks by Commissioner for Internal Market Thierry Breton on “European sovereignty.” The battle for the narrative will also determine the EU’s ability to look beyond capabilities. Finally, external factors will affect the evolution of the European defense debate. President Trump being re-elected in 2020 would undoubtedly be seen as a validation of France’s vision for a more strategically autonomous Europe. The election of a different candidate who reaffirms support for the European project and transatlantic political cooperation would strengthen another vision of European power. European industrial policies in particular will continue to be influenced by the nature of the transatlantic dialogue after this year’s presidential election in the United States. Security developments in the eastern and southern neighborhoods will also have an impact on European threat perceptions and could force the EU to refocus its narrative and defense efforts. In this context, the outcomes of the different EU defense initiatives will depend on a mix of administrative competency to successfully implement what has been designed, strategic ambition to look beyond the low-hanging fruit of capability building, and political creativity to reach workable compromises among different European priorities and deal with external factors.