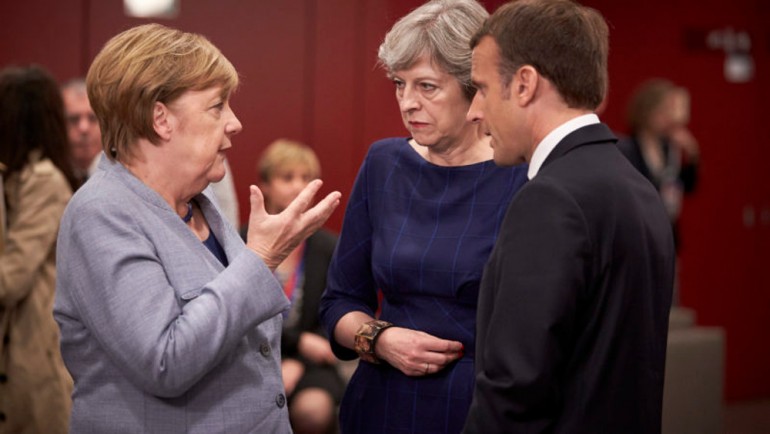 Europe is in dire need of leadership. The heads of the EU’s institutions have not provided it. With few exceptions, such as the trade and competition commissioners, all are either too weak or too beholden to the member states. At a time when Europe should be exerting political and strategic clout outside the bloc, it is being held back by the weakness of the EU’s three big countries. The three Ms—French President Emmanuel Macron, German Chancellor Angela Merkel, and British Prime Minister Theresa May—are each hobbled by domestic crises and infighting at a time when the EU needs strong personalities at the helm.

Take Macron. He is one of the most passionate of Europeans. He was elected eighteen months ago on a pro-European platform. He saw off the National Front. He has called several times for major structural reforms of the bloc. He has embarked on bold economic reforms at home. But he is prone to losing ministers. Another one of his key cabinet members and ardent loyalists, former interior minister Gérard Collomb, resigned on October 2. The opinion polls are turning against Macron. As if he didn’t have enough domestic problems or goals he has received little support for from other key EU member states, particularly Germany.

Macron’s ambitious plans to strengthen and further integrate Europe could have gained traction had he obtained credible backing from Germany. Despite all the bilateral meetings and the warm hugs, Merkel, when it comes to Europe, is neither politically nor emotionally on Macron’s side. One reason is that Merkel, now thirteen years in power, leads a coalition that is marred by infighting and rivalry. Hardly a week goes by without her interior minister, Horst Seehofer (who is also the leader of the Bavarian-based Christian Social Union party), doing everything possible to undermine her authority. And hardly a week goes by without her coalition partners, the Social Democrats questioning how much longer this government can continue.

As the squabbling continues and the opinion polls hammer the conservative bloc and the Social Democratic Party (SPD), the far-right, anti-immigrant, and Euroskeptic Alternative for Germany (AfD) is riding high in the polls—and so, by the way, are the Greens. Neither Merkel nor Andrea Nahles, leader of the SPD, have been able to dent the growing strength popularity of the AfD. Both leaders seem unable to communicate what they want the coalition to achieve. And both do not want to talk about Europe or even the immense efforts being made by Berlin to integrate the one million refugees than entered Germany in 2015.

Above all, despite all the rhetoric about the importance of the Franco-German engine as the motor that drives Europe forward, that’s just what it is : rhetoric. Merkel has delivered almost nothing to Macron since his election. She fears that his proposals for a multispeed Europe could lead to the bloc’s disintegration. No wonder Macron’s room for maneuver in the EU has been seriously limited. And even if she really wanted to rally round Macron, Merkel would have to see off in her own party the Euroskeptics and critics of Macron’s proposals for an overhaul of the eurozone.

It’s not certain she could or would be able to exert her authority to do just that. She suffered a big defeat last month when Volker Kauder, her steadfast and loyal leader of the conservative bloc’s parliamentary grouping ever since Merkel became chancellor in 2005, failed to get reelected as head of the CDU/CSU parliamentary caucus. Kauder’s shock defeat amounted to a rebellion within Merkel’s own party. It showed the decline of her authority.

As for Theresa May, she keeps fighting to exert her authority over a deeply divided Conservative Party and a Britain so polarized over Brexit. Her fiery and confident speech at the Tory party’s annual conference has bought her some time domestically. But as regards Britain making any strategic contribution to shaping European defense, foreign, and security policy, it’s a nonstarter. Brexit has turned this big EU country into a pygmy on the European level.

The other two big Ms, Macron and Merkel, could have compensated for Britain’s weakness in Europe. Unfortunately, it’s not going to happen—even though the EU is in desperate need for Berlin and Paris to push the bloc forward. Paradoxically, U.S. President Donald Trump should have been the catalyst for the three Ms to take a hard look at the strategic choices facing Europe. But Brexit, a squabbling coalition in Berlin, and a French president whose reforms for Europe have found so little support from his EU counterparts, has for now robbed the bloc of that chance.