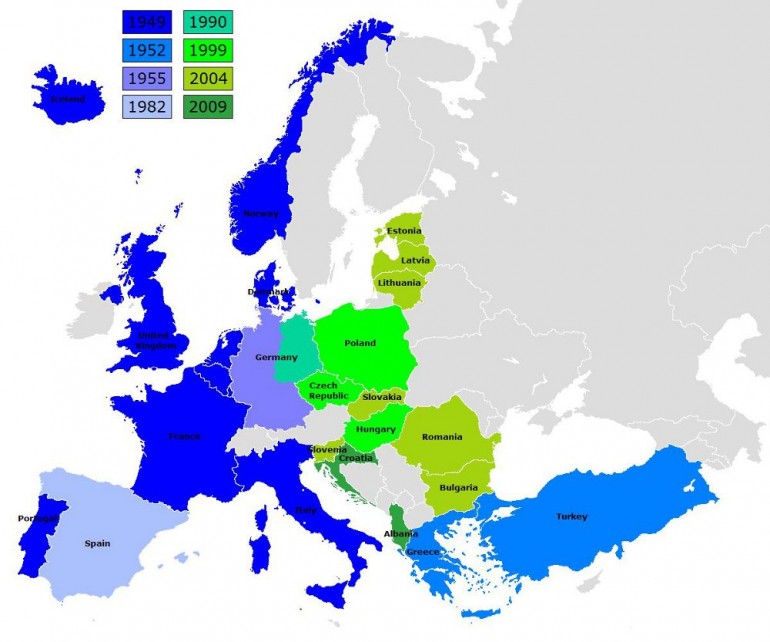 The re-emerging security challenges posed by Russia on Europe’s periphery have forced NATO to shake the rust from its aging toolbox and respond to what U.S. Assistant Secretary of State Victoria Nuland, speaking at the German Marshall Fund’s Transatlantic Talks, called “the greatest challenge to European security that we have seen at least since the Balkan wars.” While conversations on NATO’s transformation, ongoing missions, and expeditionary forces abound in the run up to September’s NATO Summit in Wales, Russia’s contradictory actions of recognizing Ukraine’s government while funding anti-government forces continue to complicate Western responses. Even with the recent agreement on a sanctions package following the downing of MH17, exceptions signal the precarious nature of Western resolve in meeting the crisis directly.

In order to adapt to this new landscape, NATO must re-examine the policies that led to the current European security environment. This should involve abandoning indecision and ambiguity toward aspirant NATO members in the post-Soviet space, and providing clarity regarding NATO’s objectives to its eastern neighborhood moving forward. Although Article 5 – by which members consider an armed attack against one as an attack against all – remains the preeminent pillar of the alliance, and the integrity and security of Romania, Poland, and the Baltics is unquestionable, other matters are less clear-cut. The permanent positioning of NATO forces in the Baltics would potentially violate the 1997 Russia-NATO Founding Act and would likely incur an adverse and possibly strong response from Russia. While some have claimed that Russian aggression in Georgia and Ukraine as well as unilateral suspension of the Conventional Armed Forces in Europe treaty have already violated the tenets of this arrangement, reciprocal action by NATO would dissolve any remaining trace of the Founding Act. However, given Russia’s prior behavior, another reset that alters the very foundation of Russia-West relations is likely warranted. Few imagine that a majority of NATO member countries will seriously entertain conversations on enlargement, let alone provide a Membership Action Plan (MAP) for post-Soviet countries, specifically Georgia. In light of these realities, NATO’s enlargement policy following the 2008 Bucharest Summit – when Georgia and Ukraine were both given verbal assurances of future membership – has proven ineffective, and appears reckless. Since then, Russia has ignored the sovereignty of both nations through territorial incursions and open conflict. The ambiguity of eventual membership without concrete steps or guarantees has undermined NATO’s legitimacy in the region, while emboldening partner countries to assume security assurances of mutual strategic interest they do not possess. Given this tenuous situation, NATO must either be deliberate with its future policy of enlargement toward Europe’s east and decide to build real bridges to these countries, or be clear in its intention to consolidate and reinforce current borders.

If it chooses enlargement, NATO could reassert itself in security discussions in the post-Soviet sphere by engaging its eastern neighbors through concrete measures aimed at closer integration. This would require a well-defined plan for eventually receiving a MAP and closer cooperation on multilateral and bilateral measures, including military-to-military collaboration through exercises and participation in future missions. NATO’s recent decisions to provide Ukraine with a military aid package and reassert the open door for Georgia may indicate a willingness to do just this. If NATO chooses consolidation, the Alliance should focus on only tangentially engaging the likes of Ukraine and Georgia on issues of greatest concern or interest, while completing the current borders of enlargement, vis-à-vis the Balkans. This should include an offer of membership to Montenegro, more forward-leaning engagement with Serbia and Bosnia-Herzegovina, and the facilitation of a resolution to the current dispute surrounding Macedonian membership. Either approach must also simultaneously include components to deter Moscow from further aggression. What NATO cannot afford is to continue a policy of enlargement ambiguity, which has bred uncertainty and has witnessed two open conflicts and unchecked incursions by Russia in countries that have only been given vague promises of eventual membership. Regardless of which approach NATO assumes, it cannot continue to believe that Russia’s actions under Vladimir Putin are benign. Russia’s own formalized policies do not reflect this, and Moscow certainly does not indicate a desire to be a constructive, strategic partner. NATO’s current policies and postures neglect this reality, which has resulted in a relatively weak response to Russia’s aggression and its defiance of Western demands. NATO must decide to either be creative in building new bridges to partners in Europe’s eastern periphery or build borders, solidifying the project and shoring up unfinished endeavors that are within its current reach. Either path requires a recognition that a tougher stance must be taken with Moscow. A risky outcome of the Wales Summit would be to continue a status quo policy that does little to help post-Soviet partners with their pending membership claims, while ignoring Russia’s assertive behavior and intentions in Europe’s east.