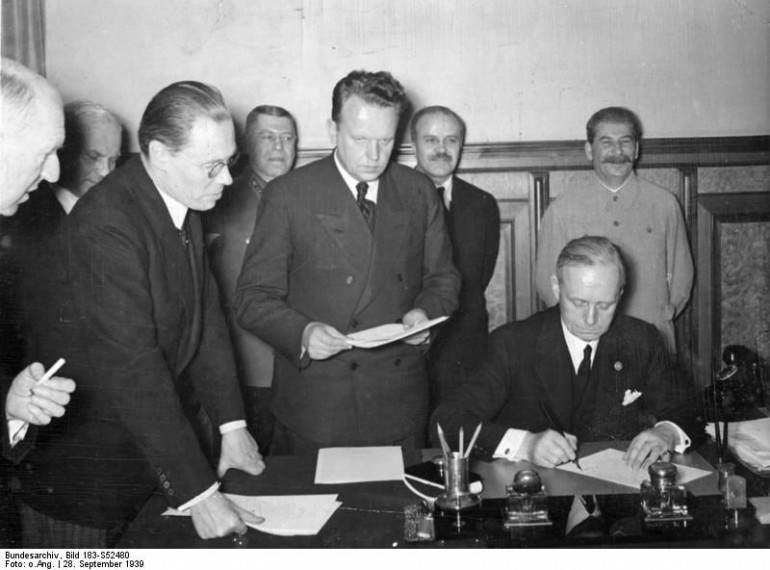 August in Russia is a big month for anniversaries. Aug. 19, 1991, saw a conservative military coup in Moscow ; its failure signaled the terminal phase of the fall of the Soviet Union. On Aug. 23, it will have been 75 years since Soviet Foreign Minister Vyacheslav Molotov and German Foreign Minister Joachim von Ribbentrop signed a non-aggression treaty in Moscow. Both these events have almost been forgotten. But studying them certainly wouldn’t be a waste of time for anyone trying to understand modern Russia.

When I was a student in the mid-’90s and interested in making some spending money, a German foundation gave me a job writing a bibliography of the most interesting articles from the Volga German Autonomous Region’s biggest publication.

This region existed in Soviet Russia from 1918 to 1941 and was populated by the descendants of German colonist farmers who had come to Russia as early as the 18th century. The region was abolished on Aug. 28, 1941 — yet another forgotten August date — two months after war broke out between the Soviet Union and Germany. Most ethnic Germans were subsequently deported from the Volga region.

In Germany, the history of the Volga Germans is remembered quite a bit better than in Russia, and because of that I spent some months immersed in the periodical archives of several Moscow libraries. Flipping through yellowed pages full of hard-to-read Gothic script, I got the chance to visit long-gone eras ; perhaps the most interesting of them was the end of the 1930s.

The newspaper naturally covered events outside of Russia, including those tied to national socialism in Germany or, for example, the civil war in Spain. Day in and day out, Hitler’s government in Germany was presented to readers in the most caricatured fashion possible, but at the same time was discussed as a threat and potential enemy.

Until suddenly in 1939 everything changed. The anti-fascist caricatures and rhetoric disappeared, and the tone turned businesslike and proper. The swastika flag, which had until then been placed on maps to show readers the looming threat to Europe from fascism, now appeared in official photographs. Finally, on Aug. 24, 1939, the paper published a celebratory article on the signing in Moscow of a historic agreement between the Soviet and Nazi ministers of foreign affairs.

One of the most important moments of the perestroika era was when the secret additional protocols of the Molotov-Ribbentrop pact were made public. These secret additions assigned the Baltic states to the Soviet Union and divided up Poland into German and Soviet spheres of influence. These protocols were a real shock to a country that had been proclaiming itself the defeater of fascism since 1945.

That uncomfortable moment of closeness between the Soviet leadership and the Nazis explained, for example, much about the way in which the Baltic republics left the Soviet Union. That is, it was an explanation for those who wanted to understand, but those people were and still are few and far between in Russia.

Even today, the leaders of the ministries of culture and education are seriously discussing ridding the school curriculum of the paragraphs about the secret protocols. This part of history too obviously contradicts the official propaganda on the war with Hitler, which, as we know, is so significant in today’s manipulation of public opinion.

Since every other car in Moscow has "To Berlin !" or "Thanks for the victory, Grandpa !" scrawled on the window, it is clearly awkward to remember when swastika flags flew on Moscow streets, or the joint Soviet-Nazi parades in Poland. Certain questions could arise that many would rather avoid.

But if the Molotov-Ribbentrop pact is expunged from official history it will open a real Pandora’s box. After that, will Stalin’s crimes be eliminated ? What about the horrors of food requisitioning during "war communism" or the bloody details of the civil war ?

This would be a true falsification of Russia’s history. Those who actually value the history of their country strive to remember everything and attempt to understand each step, each event in the past.

Russians have a habit of mocking Americans as a nation, with their paltry 238 years of history, as compared with our 1,000-year roots.

But any Russian who has visited Washington D.C. and simply walked down the National Mall, let alone gone to the museums and archives, understands that few peoples in the world value their history as much as the Americans do. There are also few so willing to exhaustively examine the most tragic episodes of their national history, as the Americans do with, for example, the Civil War of 1861-65 or the wars in Korea and Vietnam.

Russians, with our desire to hide away all the memories that make us uncomfortable today, are much less familiar with our 1,000-year history. Russian history, after all, is full of bothersome contradictions that are easier to forget than come to terms with.

Some of our history justifies the institution of monarchy, and some of it exalts the people’s fight for liberation from imperial oppression. Sometimes it shows Stalin in a positive light, then criticizes him, then again begins to consider him an "effective manager."

Sometimes it seeks a balanced understanding through the complex ethnic makeup of modern Russia to describe the relationship between the ancient Russian state and the Mongol empire. And sometimes it practically returns to a monarchic and imperial model, a motivation for President Vladimir Putin’s Crimean actions.

But we can’t forget anything. Our memory should be detailed because how history is taught determines much about a state’s political discourse.

For instance, if we only discuss Nazi Germany using garish caricatures of Soviet heroics, it will be easier to encourage popular hatred for whomever the Kremlin currently equates to Hitler.

Moreover, people raised on these primitive images never think about the true root of Hitler’s national socialism. By not understanding that, they risk missing the moment when the embryo of national socialism awakens in their own body politic.

The situation is nearly the same as with the putsch of 1991. Many would prefer to forget it ever happened. But the events of August 1991 were a turning point, without which the creation of a modern Russia would have been impossible, not to mention the careers of the country’s current leaders.

Of course, common opinion sees the fall of the Soviet Union as a tragedy. If it was, then there’s nothing to celebrate in particular about this anniversary. Better to forget it, and remember the things that make everyone happy. Too bad that, in today’s world, the list is so short.