There is a deal to be done to save the euro from deepening crisis. The outlines of it are generally accepted outside Germany : structural reforms in France and Italy and elsewhere combined with measures to strengthen their long-term fiscal positions ; and in return, a large pan-eurozone fiscal stimulus and quantitative easing (QE) by the ECB. This offers the best way out of the current impasse in the eurozone, not just for the periphery but also for Germany. But it will take a political earthquake for the Germans to back such a deal. Instead, the stability of the euro and the futures of the participating countries will continue to be vulnerable to the short-term exigencies of German domestic politics. This is a recipe for stagnation, deflation and political populism in France and Italy. It may culminate in a breakdown in relations between Germany and these countries and could even lead to eurozone break-up.

Why has Germany assumed such pre-eminence in the eurozone ? How is that German policy-makers from the finance minister, Wolfgang Schäuble, to the head of the Bundesbank, Jens Weidmann, can wag their fingers at everybody else for causing the eurozone crisis, while responding dismissively to any suggestion that Germany might be part of the problem ? Germany’s initial pre-eminence following the crisis was understandable – it is a major creditor and in the early stages of any debt crisis, creditors tend to call the shots. However, as a debt crisis wears on, the creditors’ resolve typically weakens as the impoverishment of the debtors rebounds on the creditors politically and economically, and the debtors call the creditors’ bluff by threatening to renege on their debts.

This has not happened in the eurozone, with Germany (and other creditor states) able to subordinate the interests of the eurozone as a whole to their own perceived interests. The debtors have put Germany under little pressure to share the burden or to reform its own economy. There appear to be two principal reasons for this. One is that many members of the eurozone see Germany as a model to emulate rather than a significant part of the problem. The second reason is that even those who understand that the structure of the German economy is a threat to the stability of the euro have been circumspect about openly criticising Germany for fear of provoking a backlash against the euro in the country. This softly, softly approach has been bad for Germany itself as it has distracted attention from the country’s formidable structural problems, and encouraged a belief that the country does not need to compromise and can afford to say no to everything.

This deference to Germany is puzzling. While it is the largest economy in the eurozone, it is hardly dominant, accounting in 2013 for 29 per cent of eurozone GDP as opposed to France’s 21 per cent, Italy’s 16 per cent and Spain’s 11 per cent. Economic growth in Germany has certainly rebounded faster since the crisis than in other eurozone countries. But the German recovery now seems to have run its course, with exports to both European and non-European markets under pressure and domestic demand being held back by weak levels of public and private investment (see chart 1). Even the German government expects growth of just 1.3 per cent 2014 and 1.2 per cent in 2015. 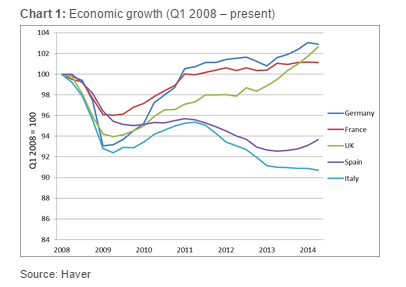 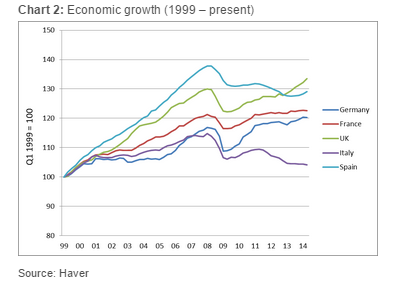 There have been some tentative signs of rebalancing over the last 12 months – with growth in domestic demand outpacing overall economic growth. But Germany remains chronically export-dependent – its current account surplus is on course to exceed 7 per cent of GDP in 2014 for the second successive year. The country is certainly not the ‘locomotive’ of the eurozone economy, as some journalists like to call it, but a drag on it. Some German policy-makers argue that stronger domestic demand in Germany would have little impact on other eurozone economies, but they are being rather disingenuous. The government has attributed the economy’s loss of momentum over the course of 2014 to weak eurozone demand, so cannot simultaneously deny that what happens in Germany has no impact on other eurozone economies. With Germany accounting for almost 30 per cent of the eurozone economy, what happens to aggregate demand in Germany clearly has a major impact on the level of demand across the eurozone as a whole.

German policy-makers tend to bridle at any suggestion that they may be guilty of mercantilism and there is indeed little to suggest that they are consciously setting out to beggar their neighbours. But there is no denying that Germany remains dependent on foreign demand to bridge the very large gap between what it produces and what it consumes, and that this is not a replicable model. An economy as small and open as Ireland’s can rely on wage cuts and rising exports to underpin recovery. But big economies in which trade plays a lesser role cannot do this, at least not all at the same time. Eurozone member-states need to increase the size of the economic pie rather than fighting for bigger shares of a constant pie. 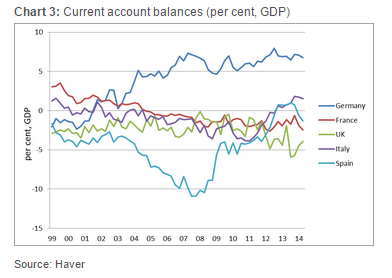 Indeed, Germany’s strong employment performance – unemployment stands at just 5 per cent and the employment rate at a record high – would look quite different were it not for that foreign demand. Employment has also risen by more that would be expected from weak economic growth, suggesting that German employers (like their UK counterparts) have been taking on more workers in preference to boosting capital expenditure (which is no higher than it was in the first quarter of 2008). Moreover, the tightness of the labour market has not yet fed through into a meaningful recovery in real wages after years of wage restraint. Real wages should rise by around 1 per cent in 2014 (after falling last year), but this partly reflects unexpectedly weak inflation. Indeed, far from experiencing a surge (as many in German commentators feared when the ECB held interest rates lower than they thought Germany needed), German inflation fell to just 0.8 per cent in September, compounding deflation pressures across the eurozone.

Germany’s public finances are in good shape, allowing it to portray itself as a saint among fiscal sinners (German policy-makers still stress above all else the role of fiscal ill-discipline in causing the crisis). The government will again run a small surplus this year (see chart 4) compared with substantial deficits elsewhere. With growth in the German economy faltering, this would be the ideal time for the government to boost its spending. And there is no shortage of things it could spend the money on. Levels of public investment are very low in Germany, even by Western European standards. Indeed, net public investment is negative (that is, Germany is not investing enough to replenish the country’s public capital stock), storing up problems for the future (see chart 5). Germany could also boost defence spending, which is languishing at just 1.3 per cent of GDP, and so help to improve its ability to play a useful role in providing for Europe’s security. Cuts in incomes taxes and/or value-added-taxes could also give impetus to the moderate upturn in private consumption that is underway, in the process helping the economy to shake off the impact of weaker exports. 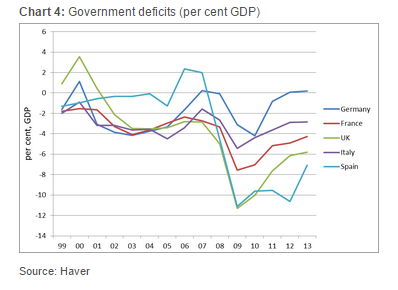 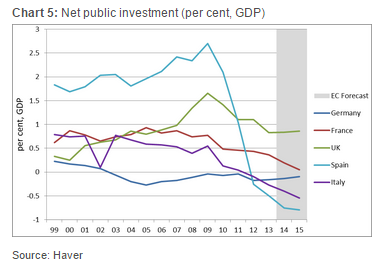 How is the German government likely to respond to the slowdown in Germany and the worsening crisis across the eurozone ? It will probably continue to show some flexibility regarding the fiscal targets facing other members of the eurozone such as France and Italy, while sticking publicly to its hard line. There will no doubt be a bit of fiscal easing at home, but nothing dramatic, with the government citing the need to comply with a constitutionally-binding rule requiring the government to run a balanced budget, which comes into force in 2016. Taken together, these slight shifts in Germany’s position will do little to alleviate the pressures on the eurozone economy (a much bigger stimulus is required to ward off slump and deflation) or to rebalance the German economy. Meanwhile, Germany will remain the biggest obstacle to QE by the ECB, which would aim to boost inflation expectations and hence the readiness of firms and households to spend. Were Germany to support such action, other sceptical countries would no doubt fall in behind it.

If, as is increasingly likely, the ECB pushes ahead with QE despite German opposition, its effectiveness will probably be undermined by the lack of a major fiscal stimulus to the eurozone economy. The ECB may also struggle to bring about a substantial fall in the euro because of the size of the eurozone’s trade surplus, which boosts demand for euros. (The eurozone’s trade with the rest of the world would be broadly balanced were it not for Germany.) And if QE does succeed in weakening the euro without an accompanying programme of fiscal stimulus or aggressive steps to rebalance the German economy, it risks being seen by the eurozone’s trade partners as a mercantilist move in a global economy characterised by very weak demand. One consequence could be to further weaken the chance of brokering a meaningful Trans-Atlantic Trade and Investment Partnership (TTIP). It could also further unbalance the UK economy, strengthening Britain’s eurosceptics.

Germany’s current intransigence poses a far greater risk to its economic and political interests than the ‘grand bargain’ outlined at the beginning of the piece. Germany cannot afford the impoverishment of the eurozone. The rapid slowdown in world trade, in particular trade with China, has shown this. If the German economy is to grow sustainably, it will be as part of a healthy eurozone economy, in which Germany is deeply enmeshed through trade and investment. Nor does Germany’s current uncompromising stance limit the exposure of German taxpayers to bail-outs of other members. Aside from the impact that the ongoing slump across the eurozone will have on German growth (and hence public finances), debt burdens will reach unsustainable levels in more eurozone countries. The inevitable debt defaults in these countries will impose incalculable costs on the German taxpayer.

German politicians, like all politicians, are focused on getting re-elected, and they believe that their current approach to the eurozone is the best route to that. But long-term threats eventually become immediate threats. Germany needs a proper debate about the choices facing it, much as the German government has repeatedly demanded of the French, Italians and others. Unfortunately, there is little sign that this will happen without greater outside pressure. The French and Italians need to force this debate by making clear to Berlin that it cannot assume that the euro will endure in its current form without Germany making significant compromises. By ending their deference to the German government, they would hopefully expose the weakness of Germany’s bargaining position and prompt a more objective discussion within Germany of its own structural problems and how they play into the eurozone crisis. There is a risk that such a confrontation could play into the hands of the right-wing Alternative für Deutschland (AfD), which has already tapped into anti-euro sentiment. But Germany’s domestic politics should not be allowed to stand in the way of a solution to the crisis, any more than French or Italian politics should be allowed to do so. If Germany really is as pro-European as its politicians argue, its grand coalition should be able to convince enough Germans that a grand bargain is in the country’s own interests.